You are here: Home / One hundred thousand pieces assembled per hour

It’s not a dreamlike vision, nor an obstinate research for impossible results: it’s a gorgeous reality, thanks to the latest application developed by Gefit S.p.A. in the assembly automation field.

A system that is able to redefine and push to the highest level the idea of high speed,  that has always been  founding the philosophy of the company, who is leader in production of moulds for thermoplastics and assembly machine.

Thanks to its strong experience in the assembly of liner inside caps with different diameters, Gefit developed a new system able to carry out two operations at a time, so as to provide its customers with an instrument  fit to achieve the incredible target of one hundred thousand pieces per hour.

Flexibility and reliability are the main features of an application that bodes to arouse a great interest  in the worldwide market, particularly for all those companies  whose main activity is linked to the dealing of caps with liner.

The best part, in this case, is that Gefit machine doesn’t only assemble. But let’s proceed step by step: the cell is equipped with caps special feeding units, which enter the machine in groups of eight on two different working platforms, both working on the same machine.

The liner is cut directly from a coil and at the same time is assembled inside the cap. The production process is then completed by induction welding, which is also made at the same time.

This extraordinary system is operated by a full-electric platform that,  thanks to its “Gefdrive” base, enables to reach incredibly fast and precise working cycles. In practice, it’s the same platform used for the standard lining machine, already known and appreciated in the market.

For this specific project the closures processed by the new assembly cell are used for the beverage industries, anyway Gefit system can fit very different caps, from the cosmetic to the pharmaceutical fields, besides  a large range of food products: chocolate creams, instant coffee and powders in general. 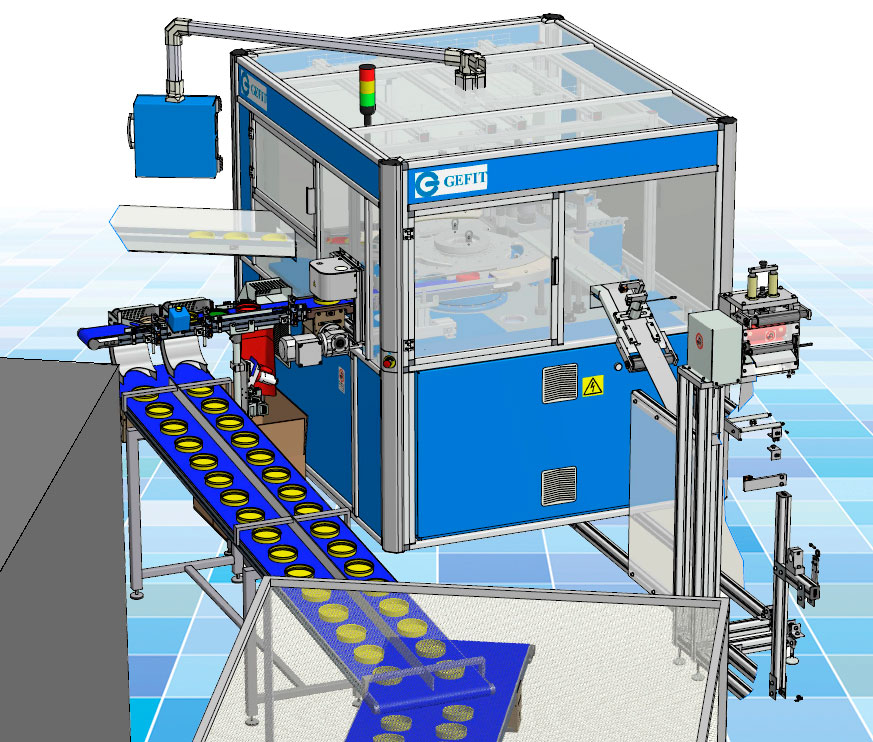